Home/Individuals with LGMD - Interviews, LGMD2A/INDIVIDUAL WITH LGMD: Jade
Previous Next 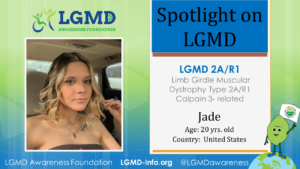 I was officially diagnosed in March 2021, so this is all still new to me.

What were your first SYMPTOMS?

The first time I noticed symptoms, I thought I was just dehydrated.  I felt weak, my legs like jello, and pain in my hips.  Now that I am aware of my diagnosis, I can look back and see symptoms from as early as the age of 12.  I played softball and couldn’t make my legs run fast no matter how hard I tried.  I also have always had abnormally large calves, but I now know that can happen due to the lack of muscle strength in your quads.

No, I am the only person in my family with LGMD2A/R1.

Stairs hold me back from a lot.  I can still tackle stairs, but it takes so much effort and energy.  It is not worth it.  I’m also having to learn to adjust my daily life such as, having a chair to sit and rest when cooking, sitting on the floor to hold children instead of picking them up, and limiting the number of things I do in a day.  The biggest hurdle that I’ve experienced is the mental hump regarding my power chair.  I know that I need to use it but there is a mental barrier that hasn’t accepted my diagnosis yet.

My relationships and still having a positive outlook on life.  I completed high school, but I went through the trouble of diagnosis after, so haven’t made it to college yet but that is a goal of mine.

It’s given me the ability to be more self-aware and to self-educate.  I’m more in touch with my body now, I can tell if I’m in rhabdomyolysis, if I am getting work down, or if I just need to take a rest.  Due to the lack of research for LGMD, it is a lot of self-education and advocacy.  I live in a semi-rural community, so no doctor had any clue on what to do for me or what I had.  It’s now to a point where I can call my PCP, tell them what is going on, and they will treat me accordingly.

The first things I would like to do is go on an adventurous vacation/road trip.  It is not practical for me now but I always want to go to the Grand Canyon, Yosemite, the tallest point of the Appalachian Mountains, and the Hawaii volcanoes.