Home/Individuals with LGMD - Interviews, LGMD2D/INDIVIDUAL WITH LGMD: Osman
Previous Next 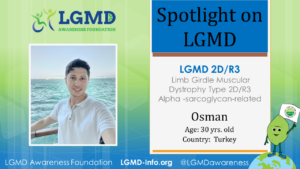 What were your first symptoms?

Yes, my sister has also been diagnosed with LGMD2D/R3.

The greatest challenges involve activities of daily living. Not being able to go where i want with my family and to climb stairs without holding onto something.

What is your greatest accomplishment?

I became a person with high awareness. I try to help other people in every situation, to the best of my ability. I try to announce my disease and other diseases to other people.

I want the world to know everything about LGMD – symptoms, challenges, management, rehabilitation, latest scientific research, and the organization working to raise awareness as well as providing some relief to the individuals and families affected by this progressive neuromuscular disease.

If I get cured, I want to run non-stop and to climb stairs in places I feared before.