Home/Individuals with LGMD - Interviews, LGMD2J/INDIVIDUAL WITH LGMD: John
Previous Next 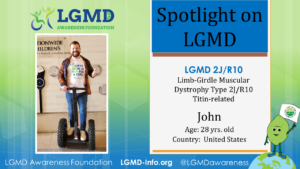 What were your first SYMPTOMS?

My brother also has LGMD2J.

The greatest challenges are losing the ability to do the things I love as well as having to find new hobbies repeatedly due to progressive weakness.  That is hard to deal with.   Now I am also finding that everyday activities are difficult or impossible to complete independently without the help of my amazing wife, Christina. Unfortunately, due to the nature of my disability and the mobility device that I use, I am frequently discriminated against and denied access to some public places.

Marrying my beautiful wife, Christina and graduating with a bachelor’s degree in Chemistry.

Having the disease has really shaped who I am today, by challenging me, allowing me to meet others in the disability community, and by pushing me to be the advocate I am today.  Being limited in my physical abilities has made me a more creative problem solver and has taught me a lot about patience.  The disease really feels like it is beating me down sometimes, but it is important for me to remember that I am not alone in the fight for real treatment for conditions like mine.

I wish there was more widespread awareness of the impact that having a condition like LGMD can have on someone’s life, mental health, and life expectations.  I want others to realize the severity of the disease progression but also the worthwhile fight we must all join at some point against chronic and rare diseases.

Hands down, I would hop on a dirt bike and ride for days!  I used to ride a lot when I was younger but am no longer strong enough.  I still think about it every day.