There are over 30 genetic sub-types (forms) of LGMD and all these rare muscular dystrophies cause weakness of the ’limb-girdle’ muscles — the muscles surrounding the shoulders and hips. The severity, age of onset, and features of limb-girdle muscle dystrophy vary among the many sub-types of this condition and may be inconsistent even within the same family. Signs and symptoms may first appear at any age and generally worsen with time, although in some cases they remain mild.

In the early stages of limb-girdle muscular dystrophy, affected individuals may have an unusual walking gait, such as waddling or walking on the balls of their feet, and may also have difficulty running. They may need to use their arms to press themselves up from a squatting position because of their weak thigh muscles. As the condition progresses, people with limb-girdle muscular dystrophy may eventually require wheelchair assistance. 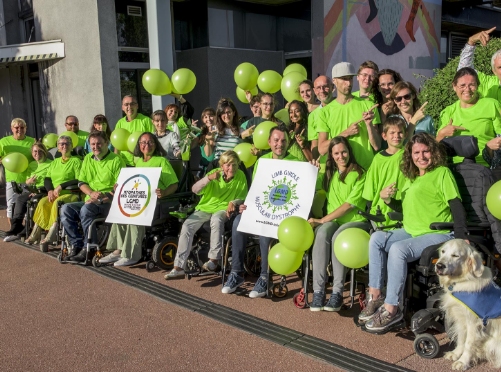 Muscle wasting may cause changes in posture or in the appearance of the shoulder, back, and arm. In particular, weak shoulder muscles tend to make the shoulder blades (scapulae) “stick out” from the back, a sign known as scapular winging. Affected individuals may also have an abnormally curved lower back (lordosis) or a spine that curves to the side (scoliosis). Some develop joint stiffness (contractures) that can restrict movement in their hips, knees, ankles, or elbows. Overgrowth (hypertrophy) of the calf muscles occurs in some people with limb-girdle muscular dystrophy.

The weakening of the heart muscle (cardiomyopathy) occurs in some forms of limb-girdle muscular dystrophy. Some affected individuals experience mild to severe breathing problems related to the weakness of muscles needed for breathing.

Intelligence is generally unaffected by limb-girdle muscular dystrophy; however, developmental delay and intellectual disability have been reported in rare forms of the disorder.

The diagnosis of LGMD is often based on clinical history, including possible family history, physical examination and supporting laboratory studies. For some forms of  LGMD, it is possible to make a definitive diagnosis by either a blood or saliva test to determine the specific genetic defect responsible for symptoms.  A muscle biopsy is often helpful to determine if weakness is caused by muscular dystrophy, an inherited disorder, or by other acquired causes of muscle degeneration such as from inflammation or toxic exposure.  It is very important for you to get a genetically confirmed LGMD diagnosis.   (If your doctor tells you that you have an LGMD but doesn’t genetically confirm it, your diagnosis is considered “incomplete”.)

In addition to their primary care physician, individuals diagnosed with LGMD often are under the care of specialists who comprise a multidisciplinary team of doctors and other healthcare professionals.   Although no cure or treatment currently exists for any form of LGMD, proper medical management is vital for maintaining function and quality of life.

The actual team of specialists may vary depending upon the form of LGMD (sub-type) and the stage of the illness.   The multidisciplinary team of healthcare professionals that may help manage your care could include:

For someone with LGMD, many or most of these daily activities can eventually become difficult or even impossible to perform independently, depending upon the stage of the progressive disease.