Home/Individuals with LGMD - Interviews, LGMD2C/INDIVIDUAL WITH LGMD: Arthur
Previous Next 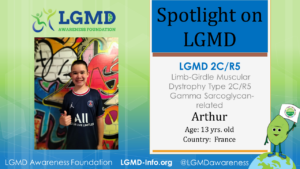 I was diagnosed when I was 9 years old.

What were your first symptoms?

Since I was little I have had trouble running and getting up from the ground, but also climbing stairs.

No, I have a sister but she doesn’t have LGMD.

It’s not easy to make our difficulties understood when we are children, often people believe that we don’t want to do things when we cannot because our bodies work differently.

Despite the illness, I always remain happy and ambitious.I hope to stay up as long as possible.

I try to do sport at my level and at my pace, especially soccer, I love the French team and especially Paris. Unfortunately I can’t run. As long as my muscles can hold me down I’ll keep going.

I am a fighting person, I do not want to give up in front of the disease, I want to overcome it. This is why I always remain positive.I find that sick people have a great inner strength that is important to keep so as not to weaken. I have met other people with LGMD and all of them have this inner strength and I like it.

I would like people to know and understand the seriousness of the disease and the risks that there may be even if currently it is not very visible when we are children. It is difficult to explain this because others think that we don’t want to do things and it can hurt a lot mentally.

If I’m cured, I want to run in a big straight line as long as possible.Also i want to become a great footballer and be the fastest on the field.  But I also want to continue to fight for other children with rare diseases.  I hope the treatments will arrive soon.